Breaking down, getting stuck and making friends

One question we get asked a lot is: have you ever got stuck? Up until last week, the answer was no. I mean, it’s a Hummer, right? But now…well, let me tell you a little story. 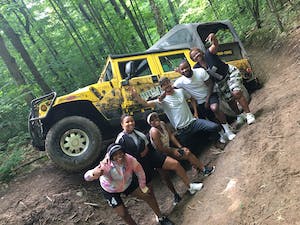 Last year, Michael and his family booked a private tour with us. Reilly (Isaac’s brother) was their driver and, on the day, they headed out in to the bush. Within a short amount of time, Reilly realised the Hummer wasn’t running properly and halfway through the tour, they had to abandon it, and they began to limp their way back to the resort. What should have been a 3 minute run ended up taking about 45 mins! The problem with anything mechanical is that, eventually, something will need some work. In this case, it was a fuel pump issue, which was fixed up and ready to go again only a couple of days later.

Michael and his family were incredibly understanding. In fact, they thought the whole thing was quite the adventure! They even invited Reilly back to their vacation condo, where they insisted he join them for dinner and drinks, with everyone ending the day on a high – somewhat unexpected after what had happened! The following day, in response to my grovelling email apology, they insisted that “Reilly’s professionalism and calm demeanor got us through a chapter of our trip that will be laughed about for many family gatherings to come!” We offered them a free private tour the next time they returned to the area to make up for letting them down, and to show them what the Hummer could REALLY do!

And so, a few weeks ago I received an email from Michael, letting me know when they’d be back in town, and we got them booked in for a tour a few days ago. Isaac would be driving this time – they did ask if Reilly would be around, so they could say hi, but he was working elsewhere – and he promised to give them the tour they deserved. And what a tour! Theywhooped and giggled their way around the forest, and were enjoying themselves so much that Isaac decided to take them down a new trail we have been exploring recently. There was a huge muddy puddle on this trail, and recent rainstorms had filled it right up. Isaac had already driven through it earlier that day, with no problems. This time, however, the ruts were so deep, so muddy, and so sticky, they sucked the tires right in…and held them there. “Oh no! We’re stuck!” they all cried. “We’re not stuck till there’s no movement!” replied Isaac, confident that he’d get it out in no time, as usual. A few minutes later, however, he had to admit defeat. The mud had created a vacuum that was holding the Hummer firmly in its grasp. “Okay okay, NOW we’re stuck.” 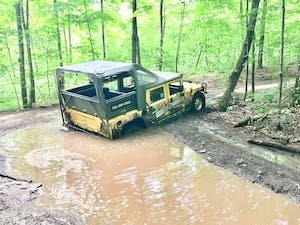 This wonderful, enthusiastic family all jumped out (without being asked!) to help Isaac get the Hummer unstuck. Shovels were used to dig out the mud around the tires, old logs were dragged in front to help her crawl out of the hole, and everyone got very muddy and wet, much to their amusement, but all to no avail. She was well and truly bogged down! Eventually,Isaac had to do the one thing no one wants to do: he had to call his little brother to come and help. Ouch. That stings, right? Reilly came over at once, in his lifted Dodge Ram diesel truck (happily they were close to the edge of the forest, so finding them was easy!), and with just a little bit of a tug with a tow rope, it gave the Hummer just enough traction to suck her out of the vacuum of the mud! Hooray! 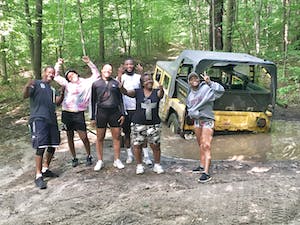 A quick trip back to the resort, in the now filthy Hummer, and once again, Reilly and Isaac were invited to have dinner with Michael, his wife Ingrid and their lovely family. They even put together a plate of steak, chicken and corn for me for Isaac to bring home with him! They spent the evening chatting with them all, and some other guests that were staying at Carriage Hills, and a real part 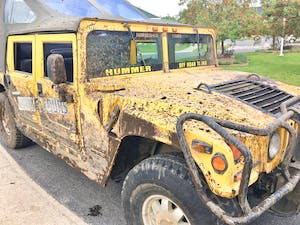 y atmosphere developed. During the course of the evening, another guest was enthusing about some smoked white fish he had bought at LaPage Fishery in nearby LaFontaine, which Michael was very keen to try, and an idea sprang to mind.

A couple of days later, just before the family had to head home, we popped over with some of that smoked whitefish for the whole family, as a ‘we’re so sorry we stranded you in the bush not once, but TWICE!’ gift. Perhaps not the usual gift you might receive from an off-road touring company, but we like to be a bit creative! We will, of course, be taking them out again next year when they return, so fingers crossed this one is less eventful please.

Customer service isn’t always easy. We’d love to guarantee we never had any mechanical issues, but we’re working with a vehicle that we push to its extremes, so it’s bound to happen occasionally. But being with a family who were determined to have a great adventure, no matter what got thrown at them, we were all able to work together to make their experiences memorable and enjoyable, regardless. We love you Michael & Ingrid! Thanks so much for everything, and see you next year! 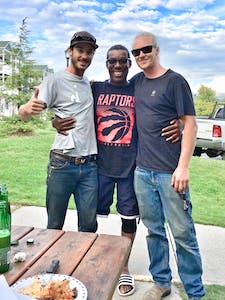