So we bought a Hummer…

My name is Mia and I’d love to tell you a bit about how we came to buy the world’s most capable off-road vehicle. We didn’t exactly intend to, not at first anyway, but it happened anyway, and we couldn’t be happier about it.

I’m originally from a place called Surrey in the UK. Whilst I’m sure off-roading happens there – in fact I know it does, typically by people with Land Rovers, and it’s often referred to as ‘green laning’ – it certainly wasn’t anything I’d ever done, or even thought of doing, before I came to Canada. Where I grew up, very much in suburbia, the closest I’d come to off-roading was that time I aquaplaned off the road while driving my Mini in torrential rain, and ended up in someone’s front garden. So, with that in mind, buying a Hummer touring company seems like an odd thing to do, and so it is. This is how it happened.

In 2007, I came to Canada on a working holiday visa. I didn’t know too much about Canada in all honesty, but I wanted to do some travelling and a Canadian friend, who had recently moved back home, told me I ought to come and visit her, and so, on a sunny Wednesday in September, I found myself landing in Vancouver, ready to start my adventure. 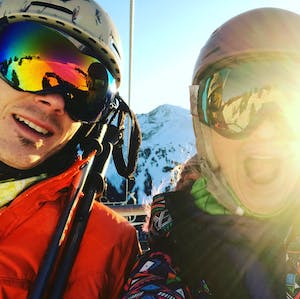 And what an adventure it turned out to be! What do you do in Canada, I asked myself? Well, I guess I’ll learn to ski. So off I took myself to Banff, where I got a job working at Sunshine Village, in the Guest Services department. As luck would have it, a rather shy young man called Isaac from Ontario had also got himself a job in Guest Services, and we found ourselves sitting together most days while we issued season passes and dealt with the Lost & Found, all the while becoming good friends. When the season ended, he went back to Ontario and I found myself heading over that way too, to visit a cousin of mine I hadn’t seen in years. While I was there, I popped in to see my lovely friend…and now here we are, over 10 years later, with two daughters.

I remember my first night visiting Isaac at his parent’s home on an acreage close to Orillia very well indeed. We had been out for dinner and as we arrived back, at 11.30pm, Isaac and his brother decided we should go off-roading. Ummm, now? Yes, definitely now! We all clambered into a Jeep Grand Cherokee that was the first bush truck (of several) that they found on their parent’s property, and off we went into the darkness of the woods, waved off by his dad, who had expected nothing less it seems. I had no idea what I was in for. Very quickly I realised several things a) they were very good at this, having been doing it since they were around 10 years old, b) they knew these trails like the back of their hands and c) the truck was not meant to make it through all the trails. The object of the game was to get the truck stuck, then get it unstuck again. This they did, over and over, until something eventually broke, and we all stomped through the muddy trails back to the house, leaving the truck there to be hauled out and fixed another day. It was a baptism of fire for a suburban girl like me, and I loved it.

In 2010 I was offered work in Alberta, so off we went. We settled just outside of Edmonton, and although we made some wonderful friends, and loved being only 3.5 hours from the Rockies, we always talked about moving back to Ontario, which we both considered home. Especially when we had our kids, with no family living nearby, we kept looking out for opportunities that might take us back east. In January 2018, just such an opportunity fell into our laps. An advertisement for Horseshoe Hummer Tours, now up for sale, was passed on to us by Isaac’s younger brother, Reilly. I honestly don’t think Isaac ever expected me to take the ad seriously, but I did, because this seemed like the perfect way for us to move back to our little corner of Ontario, have our girls grow up close to their family, and for Isaac to do the one thing that he loved doing more than anything else in the world, as a business. Who wouldn’t want to make that happen? 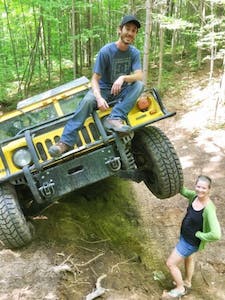 So here we are. We are SO lucky to have support from Isaac’s wonderful family in our venture, because even though we went ahead and bought the business, we are still in Alberta, finishing up our jobs over here and preparing to move our family and our household back to Ontario in early 2019. Happily, we were able to take the whole of July off work and come and get our hands dirty in the Horseshoe Valley – both literally and metaphorically – where we absolutely loved meeting all of you who came out on tours with us, and found out for ourselves just how much fun the Hummer can be! It really is the ultimate off-road vehicle. But until we are out there permanently, we are stuck running the business side of Horseshoe Hummer Tours from Alberta while Isaac’s brother, Reilly, and his dad, Imo, drive the Hummer tours for us; I’m sure I don’t need to tell you how confident I am in their abilities. But we can’t wait to meet you all in 2019!